The Zoo is taking preventative measures to protect the health of our birds against avian influenza. Winged Wonders Bird Show is currently unavailable and some bird species may not be visible at this time. Thank you for your support and understanding!

Dragons were first recorded by Western scientists in 1910. The Dutch recognized that there were limited numbers of the lizards and outlawed sport hunting and extensive killing for scientific study (the method of the day). Collecting expeditions stopped abruptly with World War II, but resumed in the 1950s. A mid-60’s expedition for a long-term study of the Komodo Dragon (feeding behavior, reproduction, body temperature, etc.) was undertaken by the Auffenberg family, who stayed on Komodo Island for 11 months in 1969. During their stay, Walter Auffenberg and his assistant Putra Sastrawan captured and tagged more than 50 Komodo Dragons. Research from the Auffenberg expedition would prove to be enormously influential in raising Komodo Dragons in captivity. Continued research has shed even more light on the nature of the Komodo Dragon. The IUCN lists the Dragon as Vulnerable and CITES Appendix I.

Saliva samples were analyzed by researchers at the University of Texas. They found 57 different strains of bacteria growing in the mouths of three wild Komodo Dragons including E. coli, Staphylococcus sp., Providencia sp., Proteus morgani and P. mirabilis and Pasteurella multocida.

The rapid growth (and therefore viurlence) of these bacteria was noted by one researcher, Doctor Fredeking, who said: “Normally it takes about three days for a sample of P. multocida to cover a petri dish … [the sample from the Komodo] took eight hours. We were very taken aback by how virulent these strains were.” This study supported the observation that wounds inflicted by the Komodo Dragon are often associated with sepsis and subsequent infections in prey animals. The Dragons will trail bitten prey for days, the sepsis ultimately killing the animal … a Dragon meal with little concern for injury in the kill. How the Komodo Dragon is unaffected by these virulent bacteria remains a mystery.

It was noted that while the pathogens found in the mouths of wild Komodo Dragons disappear from the mouths of captive animals, due to a cleaner diet and the use of antibiotics. This was verified by taking mucous samples from the external gum surface of the upper jaw of two freshly captured individuals.

The gape is capacious and large adults can swallow large chunks of prey. The tube at the front of the jaw (visible in the above photograph of the gaping Dragon) is the glottis and cartilaginous bronchial tube that pushes forward while the lizard swallows something large. This allows the animal to continue breathing while swallowing … in the same manner as snakes.

This breathing tube in association with the tongue mechanism, is often visible next to the prey item during the labor-intensive swallowing action. After eating up to 80 percent of its body weight in one meal, the Dragon drags itself to a sunny location to bask and speed digestion, as the food could rot and poison the Dragon if it sat undigested in the stomach for too long. Because of their slow, ectothermic metabolism, large Dragons can survive on as few as 12 meals a year.

At a large kill, the largest Dragons eat first, while the smaller ones follow a hierarchy. The largest male asserts his dominance and the smaller males show their submission by use of body language and rumbling hisses. Dragons of equal size may resort to “wrestling.” Losers usually retreat, though it is known that they are sometimes killed and eaten by victors. Komodo Dragons eat by holding the carcass down with their forelegs, tearing off large chunks of flesh and swallowing the chunks whole. The contents of the prey’s stomach and intestines are typically rejected. For smaller prey, up to the size of a goat, the Dragon’s loosely articulated jaws, flexible skull, and expandable throat and stomach allow them to swallow the prey whole. Copious amounts of red saliva that the Komodo Dragons produce help to lubricate the food, but swallowing can still be a long process (15–20 minutes to swallow a goat).

The Komodo Dragon does not have good hearing, and is only able to hear sounds between 400 and 2000 hertz. It is able to see as far away as 300 meters (980 ft = 3 football-fields), but has poor ability to identify objects that are not moving (stationary). The Komodo Dragon is able to see in color and, because its retinas contain only cones (eye-cells that see only color), it probably has poor night vision, like humans. Its scales have sensory plaques with nerves that facilitate (help) the sense of touch. Each scale around the ears, lips, chin, and soles of the feet may have three or more sensory plaques.

Even though young Dragons spend much of their time in trees, as the Dragon matures, its great size makes climbing impractical and then impossible. Its claws are used primarily as weapons and as grappling hooks to hold large prey for dismemberment. For a night-shelter, a Dragon, using its powerful forelimbs and claws, digs holes that can measure from 1–3 meters (3–10 ft) wide. Because of its large size and habit of sleeping in these burrows, it is able to conserve body heat throughout the night and minimize its basking period the morning after. They usually hunt in the afternoon, staying in the shade during the hottest part of the day. Special resting places, usually located on ridges with a cool sea breeze, are indicated by lots of droppings. Because of constant use and the lizard’s large size, these resting places are usually clear of vegetation. The elevated resting places serve as observation posts and strategic locations from which to ambush prey.

After digestion, the Komodo Dragon regurgitates a mass of horns, hair, and teeth (known as a gastric pellet – in the manner of raptors like owls), which is covered in malodorous mucus. After regurgitating the pellet, it rubs its face in the dirt or on bushes to get rid of the mucus.

Komodo excrement (left) is mostly white, similar to Hyena droppings (Crocuta crocuta), because of the amount of bone that is eaten. The bones are broken down, but calcium is not completely digested and passes as a white powder. [Many animals, in Africa, eat Hyena poop in order to fill their own calcium requirements. It is likely the same with the Komodo Dragon’s poop.]

The Dragon’s wide-ranging diet includes invertebrates, other reptiles (including smaller Komodo Dragons), birds, bird eggs and mammals from rats and monkeys to wild pigs, goats, deer, horses, and water buffalo. Young Komodos will eat insects, eggs, geckos, and small mammals. Occasionally Dragons consume humans and human corpses, digging up bodies from shallow graves. This habit of raiding graves has caused the villagers of Komodo to move their grave-sites from sandy to clay ground and pile rocks on top of them to deter the lizards. The Komodo Dragon may have eaten the extinct dwarf elephant Stegodon that once lived on Flores, according to evolutionary biologist Jared Diamond.

The Komodo Dragon does not seem to be able to suck water when drinking, as other lizards do, nor can it lap water with its tongue. In a manner similar to birds, it drinks by taking a mouthful of water, lifting its head, and letting the water run down its throat. Mammals are the only animals with a diaphragm (and lips) and are able to drink by sucking liquid into the mouth. Lizards other than Dragons – plus snakes and turtles – pump water into their mouths and down their throats by raising and lowering the floor of the mouth [lowering the tongue and the ‘floor’ of the mouth causes the water to flow into the mouth, and then the floor of the mouth is raised in the front first, pushing the water to the throat]. Pigeons do the same, but most birds drink by tipping their heads back, like the Komodo.

Mating begins between May and August. During this period, males wrestle over females and territory by grappling with one another upon their hind legs, with the loser eventually being pinned to the ground. These males may vomit or defecate when preparing for combat. The winner of the conflict will then flick his long tongue at the female to gain information about her receptivity. Females are antagonistic and resist with their claws and teeth during the early phases of courtship. Courtship displays include males rubbing their chins on the female, hard scratches to the back, and licking. The much larger male fully restrains the female, during coitus (achieved by inserting one of his hemipenes into her cloaca), to avoid being hurt.

About twenty eggs are laid in September. They are deposited in abandoned Megapode* nests or in a self-dug nesting hole. [*Megapodes, a.k.a. Brush Turkeys or Mound-Builders, are Galliformes, Megapodiidae]. Dragon eggs incubate for seven to eight months (the decomposition of the leaf matter and detritis in the mound – the heat of which incubated the Brush Turkey eggs – aids in the incubation of the Dragon eggs). The eggs hatch in April, when insects are most plentiful.

Hatching is an exhausting effort for the neonates, who break out of their leathery eggshells with an egg tooth that falls off soon after. After cutting their way out, the hatchlings may lie in their eggshells for hours before starting to dig out of the nest. They are born quite defenseless and are especially vulnerable as they come out of the nest. Young Dragons immediately head for the trees, safe from predators and cannibalistic adults. Many are eaten by awaiting predators. Survivors may take eight to nine years to mature, and are estimated to live an average of 30 years. They may live up to 50 years.

Young Dragons spend much of their first few years in trees, where they are relatively safe from predators. Those cannibalistic adults make juvenile Dragons 10% of their diet. According to David Attenborough, the habit of cannibalism may be advantageous in sustaining the large size of adults, as medium-sized prey on the islands is rare. When the young must approach a kill, they roll around in fecal matter and rest amidst the intestines of eviscerated animals to deter these hungry adults.

An interesting and unexpected occurrence has recently renewed scientific focus on Komodo Dragons. In late 2005, a Komodo Dragon at London Zoo (named Sungai) laid a clutch of eggs after being separated from male company for more than two years. Scientists initially assumed that she had been able to store sperm from her earlier encounter with a male (delayed fertilization).

However, on December 20, 2006, it was reported that Flora, a captive Komodo Dragon living in the Chester Zoo, in England, became the second known Komodo Dragon to have laid unfertilized eggs: she laid 11 eggs, and 7 of them hatched, all of them male. 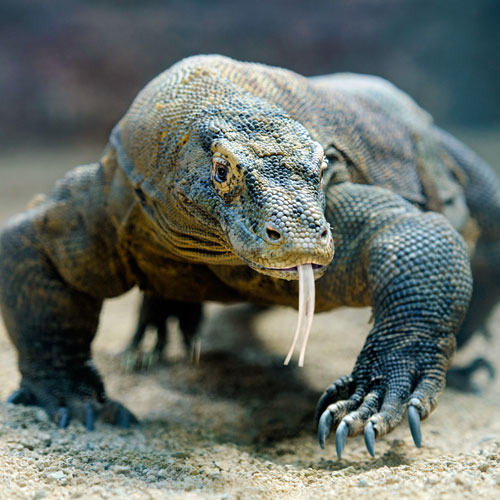 The IUCN lists the Dragon as Vulnerable and CITES Appendix I.

Locals often refer to the Komodo Dragon as the ora, or “land crocodile”, and is the largest living lizard.