A medium-sized monkey of moderately heavy build, Colobus are part of an arbitrary group called Leaf Monkeys, with large bellies because of the diet. The hair is fairly long, with the Guereza’s fringe twice as long as the rest of the coat, as is the brush on the tail. The ischial callosities are quarter-size, separate in females and connected by a bar in males. The fur on newborns is kinky-wavy and short.

The nominate subspecies, Colobus g. guereza, is found in the Ethiopian highland tropical moist and gallery forests, west of the Rift Valley and down into the lowland forests of the Awash and Omo Rivers and the Blue Nile gorge.

Glossy black fur sports a white ring around the face and a white fringe and tail-brush. Babies are completely white, showing a black undercoat in 2-3 months.

An animal separated from its group emits a guttural “orr-orr-orr” call. The troop responds immediately. This vocalization is territorial (called acoustical marking) and is taken up by the entire troop during its daily rounds. Distressed young squeak, with quick response from mom. Feeding Colobus move slowly and deliberately, quietly pulling leaves and buds off. They apparently prefer young leaves, changing locations when all the tender leaves are gone. Colobus circulate through well-defined feeding territories of about 40 acres. Seldom flighty, they show some hierarchy with a few other species. Baboons are dominant, then a large hornbill, then Guerezas and finally White-Throated (Red-bellied) Guenon (Cercopithecus erythrogaster).

Colobus are almost completely arboreal. They are outstanding jumpers, able to leap great distances, tree to tree. Some observers feel that the beautiful long white hair (much sought-after for high-fashion coats) serves as a kind of parachute, slowing their landing speed. It does billow out and would create drag, but no actual study has been done. The bold color pattern serves to break up their outline and these striking monkeys are very difficult to see in the canopy amongst the leaves. They often freeze rather than flee when scared.

Colobus do a crude form of brachiation, swinging and maneuvering with all four feet when moving through their territory. The rudimentary thumb, often only a “tubercle” in the thumb’s place, is thought to be part of the development toward brachiation. A full thumb would interfere with brachiation. Gibbon thumbs are similarly. When fleeing, Colobus do some fantastic leaping. Besides man and the occasional leopard, their primary predators are large eagles.

Colobus have an unusual stomach. The essential feature is that it is sacculated, chambered like a ruminant or kangaroo. The expanded upper region is a storage chamber that is quickly packed with leaves during a feeding foray. It is separated from the lower acid region. Because of the high cellulose content, a leaf diet is difficult to digest. It requires an especially large portion of the day for quiet rest. Microbial assistance is necessary in any animal (even termites) that must deal with cellulose. Cows and other ruminants, plus such mammals as gorillas and the Colobus spend a large amount of time resting for digestion. Colobus rest over 50% of the day. Of the remainder of the time, 20% is devoted to eating, and 5% is spent traveling.

Colobus are usually found in sexually mixed groups averaging 8-15 individuals, with only one fully adult male and 3 or 4 reproductive females. There is mutual grooming and seldom any squabbles. There is no real hierarchy, no genital swelling and no distinct breeding season. There tends to be a birth peak, timed so that weaning coincides with the greatest seasonal abundance of solid food.

Breeding pairs move away from the group (and the female, accompanied by the male, moves away when she delivers). A 6-month gestation brings a single baby that hangs on under mom’s belly. For the first few days, it is held in place with one hand during a jump. Newborns are snow-white, with black skin. They will cling most of the time for the first month. They initially make little frog-like jumps, becoming more and more independent. Highly attractive to other females, infants may be carried by any in the group (infant transfer).

I once observed our female repeatedly take her not-so-new-but-still-white infant back. It kept leaving her, going to one of the other adults. She finally sat on its tail and nonchalantly ate while the baby leaned against the restraint, jumping about at the end of its “tether” (Burleigh).

The mother will carry the youngster for about 8 months. More independent youngsters band together during the day for play sessions. They reach maturity in about 5 years. Longevity in the wild is about 20 years and 30 years in captivity. 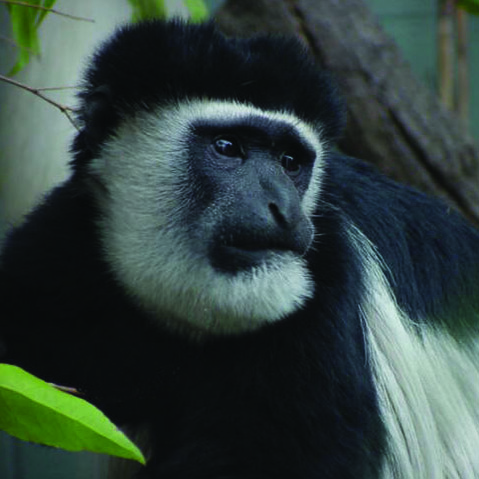 The very striking Guereza coat nearly led to extinction in the 1890’s. Because they are very predictable, traveling the same tree-top paths at the same time every day, despite being 40 meters up, they once were shot in masses and were exterminated in many regions. A market in Europe sold 170,000 furs in 1892.

Protected populations may be locally abundant. They are, however, at risk due to habitat destruction for timber and agriculture. They are currently IUCN listed as Least Concern. The other Colobus species are listed Vulnerable and they are all CITES Appendix II. (Most Red Colobus are listed Endangered or worse.)

Some observers feel that the beautiful long white hair serves as a kind of parachute, slowing their landing speed.