Please note: The Zoo is taking precautions to protect our birds from potential exposure to avian influenza, including putting the Bird Show “on paws” and moving some birds off of habitat.

Largest of the flamingos, the American Flamingo is the only species of flamingo with any dimorphism. Though there is no difference in color or plumage, the males are significantly taller than the females. There is no real difference between the sexes in other species. They have large, rounded bodies balanced on very straight and very long legs (although the thigh itself is only 3 inches long). The flamingo’s beak, the feature most recognized, sets them apart. A unique shape, with a 45-degree angle in the middle, it facilitates the plumping filtration. The beaks of the chicks are straight.

The American Flamingo, found in the Caribbean and on the Galapagos Islands, is the only flamingo naturally found in North America. Three other species, the Chilean, the James and the Andean, are from South America. The “most numerous” Lesser is found from the African Great Rift Valley to the western part of India. The “widest-spread” Greater is found in parts of Africa, Europe and Asia. Preferring warm locations with alkaline or saline lakes and estuarine lagoons, with mud flats for feeding and nesting, they will leave for a more favorable location, if water conditions change.

Flamingo plumage is some shade of pink, running to red-orange in the American. Feather color is dependent on pigments from food items and the lack of pigmented food during feather-growth results in a white or very pale feather. They would lose color in captivity if they were not fed Flamen Oil or some other dietary beta-carotene color additive. As an aside, the adults that have bred and raised a chick will lose pigment because of the energy expenditure in raising the chick. The legs are pale pink, though the feet are usually brighter. The beak is generally light at the base and has a black tip. The Lesser’s is pale pink with deep red at the base and black-tipped.

These highly gregarious birds will not breed unless in large numbers, a trait that humans only recently recognized, one that was the undoing of the Passenger Pigeon (Ectopistes migratorius). Large numbers assure group safety when in their vulnerable feeding position. The flamingos have a unique communal display, with unison marching and head-wagging (called flagging), plus bowing, flapping, stylized preening and quite a bit of noise. It is thought that these rituals help to synchronize breeding condition and timing. Flamingo pair-bonds generally last only one season. Strong fliers, they usually migrate at night, flying, like geese, in undulating lines, with outstretched necks and legs and goose-like honking.

Flamingos have the second longest legs, relative to body size, of any bird, and the neck has 19 cervical vertebrae. (The first longest legs are on the stilts, like our Black-Necked Stilt (Himantopus mexicanus)). These long legs and necks allow them to feed in deep water. With webbed feet, they swim well, but the webs are primarily for standing on mud. The webs help to create a vortex in the water when they stamp their feet to stir up organisms out of the substrate.

It is interesting that people think flamingo knees bend backwards. They do not! Because of a number of adaptations for flying, all birds stand in a slight to exaggerated sit. The short thigh is completely hidden behind the feathers on the sides and breast. The knee is above the lower line of the body, and the next joint down, the ankle, bends the same way the human ankle does. A single bone, in birds, corresponds to the bottom our foot (the flamingo’s is very long), and birds walk on tip-toe.

Flamingos have a very specialized feeding process, spending most of the day in shallow water, standing head down, filtering the water through sieve-like lamellae on their beak edge (lamella – L: thin, plate-like structure, comb). The flamingo’s thick, fleshy tongue acts as a plunger, pulling water and food into the mouth, and then forcing just the water back out. The nearly dry bolus of food is drawn into the back of the mouth to be swallowed at the same time the next mouthful of water is drawn in. The Greater has the most general feeding habits and therefore the more coarse lamellal conformation. The American’s are comparable. The Lesser feeds on the most microscopic plankton soup and has quite fine lamellae.

In early spring a mud nest is built in shallow water near shore (sometimes the nest is built in a less than ideal on-shore or even in rocky areas). The nest is about 5-18 inches high and one white egg is laid. Both parents incubate the egg over a period of 28-32 days and a gray downy chick with a straight pink bill is hatched. Sometime the parents actually help pull the chick from the shell. The gray fuzz-ball has a short neck and very short, thick legs. After a few days the precocial chick will venture from the nest – maybe it falls off and cannot get back — but it will remain reliant upon the parents to feed it for 4-6 weeks. The chick is recognized by voice and the parents will only feed their own chick, even after the chicks get off the nest and bunch together.

Flamingos feed “crop milk” sloughed from the lining of the esophagus. A highly nutritious liquid com-parable to pigeon “milk,” it is red from the carotinoids it contains. The chick is fed as the parent sets, the chick’s head protruding from between the wing and body. In a few days, after the chick leaves the nest, it will back into the legs of the parent and elevate its beak-tip, while emitting quiet begging sounds. The parent will lower its beak and the “milk” is drizzled into the chick’s open mouth. At 3 months the chick will fledge and will group up with the other fledglings. The juvenal plumage of the fledged chick is brownish-gray and white. The first adult molt is pale pink but feathers often have brownish tips. The juvenile birds do not reach full size for 1 ½ to 2 years and the adult plumage is acquired after 2 to 4 years. Late maturation is often coupled with considerable longevity and these birds can live 25-60 years.

Learn more about our animals from the people who take care of them every day. 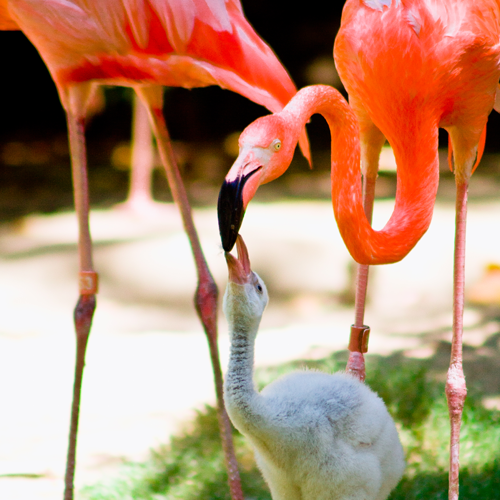 Flamingos are increasing in numbers due to the increase in man-made habitats.  The Lesser and the Chilean are IUCN listed as Near Threatened, the Andean is Vulnerable and the American and Greater are Least Concern.

The flamingo’s thick, fleshy tongue acts as a plunger, pulling water and food into the mouth, and then forcing just the water back out.

On Friday, December 9, we will be closing early at 3 pm.