Adult male lions have the well-known mane only in adulthood, after several years of growth and strength-gaining. Young second-year males have a very scraggly appearance. Adult males out-size females by a small but significant amount. Lions are extremely powerful cats with enormous forelimbs that can break a cow’s neck. Their massive build makes them largest of all cats except for the largest of the Siberian tigers.

Lions are tawny to yellow-cream, often with individual hairs darker at the tip. The abdomen and insides of legs are cream to white. The backs of the ears are dark brown to black, with no white ‘follow-me’ spots. The male’s mane is tawny to reddish-brown or black, with variations based on family lines as well as region. The coat of immature animals has a pattern of light brown rosettes that fades as they mature, although vestiges may remain on the lower abdomen and legs of adults. Lion eyes are a golden brown.

The tawny coat can tend towards light (nearly white) or dark, and fully black melanistic lions (as in black leopards (Panthera pardis) or black jaguars (Panthera onca)) have been seen. These animals, much like the white tigers, seldom live long past independence from their mother, if they leave the pride, because the odd coloration may not be accepted by others, and it may also make it difficult for them to camouflage when hunting.

Hunting may take place day or night. The lion pride is highly organized and, like most cats, they head-butt in greeting. The pride consists of 4-12 related adult females, their offspring and 1- 6 adult males. The pride may break into in groups called “companionships” within the pride’s home range. These sub-prides function independently but may come together for cooperative hunts. Males do hunt, but their primary duty is to protect the pride and its territory from interloping rival males. Bigger and slower adult males seldom join female hunts. Females and sub-adult cubs do most of the cooperative hunting. When food is scarce, males eat first, then females then cubs. As many as ¾ of non-nursing cubs die of starvation before they reach 2 years of age. Because they hunt cooperatively, lions kill more healthy prey than other carnivores.

The fact that lions band together is a very unusual behavior for cats. Although sibling groups of other cat species will do so, lions are the only cats that regularly hunt cooperatively. The basic reason behind such behavior goes to the kind and size of animals they prey upon. Despite the cat-equipment, so perfect for dealing with prey half the size of the predator, prey as big, bigger than, or significantly bigger than the predator calls for more … more claws, more teeth, more cats.

Lions often act the scavenger rather than the hunter, and their favorite source of someone else’s kill is hyenas. Spotted Hyena (Crocuta crocuta), long thought to be premier scavengers, have proven to be very efficient hunters. Hyenas and lions go back and forth with the you-steal-from-us and the we-steal-from-you activities. Which group, pride or pack, is successful at the vanquish-and-steal depends upon which group is larger at the time. Researchers have documented on-going rivalries between lions and hyenas occupying the same territory. Another favorite target for theft is cheetahs.

The lion is a typical cat in over-all structural adaptations. Grappling-hook claws and the ability to supinate the palm make subduing prey easier. Extra-heavy bone in the skull and limbs, coupled with team hunting, allows the taking of extremely large prey. Lions, for example, can withstand a kick to the head from a zebra. Lion color blends with the dry grasses of their habitat. Male manes may deter hunting success, but, more importantly, they are a deterrent to injury. Wolf-ruffs serve the same purpose, shielding the neck of combatant males from the long canines. Most scuffles are huge amounts of sound and fury, with little serious injury. Juvenile males have very scraggly manes that take years to grow to fullness. Young males cannot afford to advertise themselves as males until they are large enough and mature enough to face reigning males in any contest of strength and endurance.

Female lions can breed several times a year, but a mother will not produce her next litter until her cubs are about 2 years old. If her entire litter dies, she will mate again soon after the death of last cub. When lactation stops, the next estrous begins. A male that displaces a “reigning” pride-male will kill the suckling cubs. They are not his and bringing the female into estrous ensures that she will bear his offspring. Cubs are very small at birth – less than 1% of adult weight. An average litter is three or four cubs. Cubs suckle for 6 months or more, but start eating meat at about 3 months of age. The pride females rear their young together and will suckle cubs other than their own. The pride male is very tolerant of his own cubs, even allowing them to climb on him or tug on his tail.

Learn more about our animals from the people who take care of them every day. 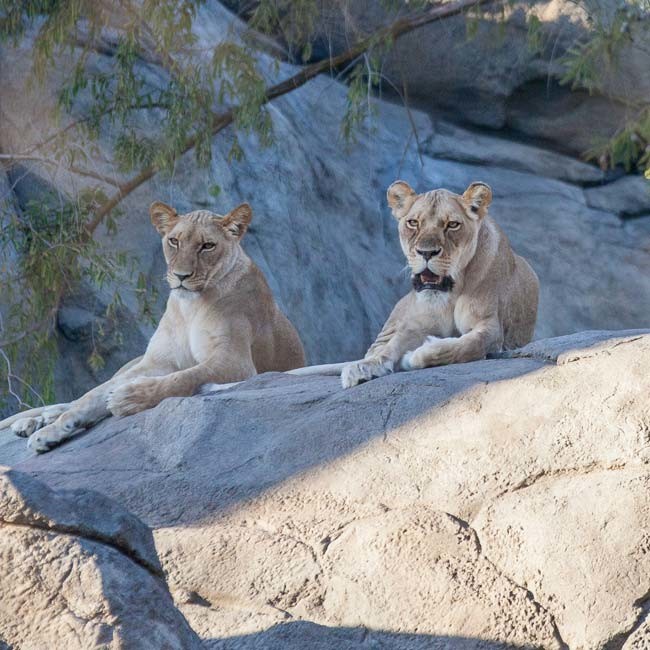 IUCN listed as Vulnerable (the Asiatic Lion is Endangered). Lions are persecuted by directs killing because of livestock predation, but (since they eat carrion) they are also killed by poisoned meat put out for Jackals.